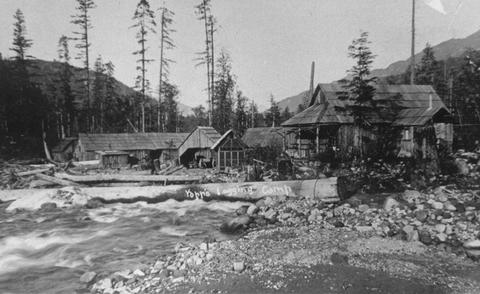 Yapp's logging camp on the Cheekye River above the railroad bridge. Photo taken around 1910.

Research compiled by Eric Andersen, 2011: The location of the camp is actually above the highway bridge and not the railway bridge.
The Squamish Timber Company is often referred to as "Yapp's", after company boss Chester Yapp. According to one source, the company was incorporated in March 1907. It was operating on the Cheekye Fan by 1908.