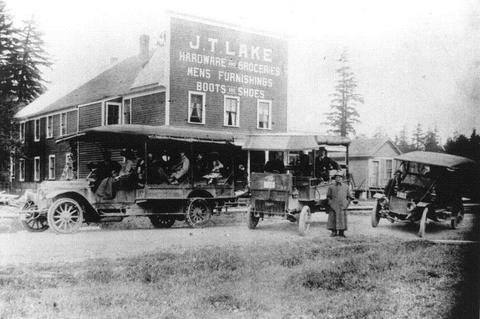 J.T. Lake was from England and had a daughter named Helen. He bought the store from Armstrong and McKinnon. He would come to houses to take orders and return to deliver the supplies. He sold the store in 1918 to Roderick Mackenzie.

Built in 1913, Armstrong & MacCallum / J.T. Lake Hardware Store (38025 Cleveland Avenue) now shows the false front common to Western buildings in its day. The original lot is reported to have been purchased for the sum of $1500. This was considered terribly high at the time but typical of prices in the area during the brief period of real estate speculation which occurred with the announcement of the proposed construction of the Pacific Great Eastern Railway line to Pemberton. Constructed as the "Armstrong and MacCallum General Store", the building later served as the J.T. Lake Hardware Store for a number of years.

Original use: General Store, Hardware Store.
Current use: Dragon Inn Restaurant.
Current condition: False front, same as original, but the roof has been changed. Building is now joined to others on either side.