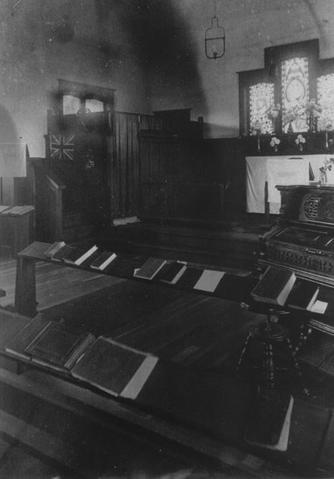 Original altar windows (1913-1920) donated by "friends in England". Later when they were damaged beyond repair, they were replaced by those that were a memorial to Mrs Mashiter. Organ thought to belong to Mrs Mashiter, used until the present organ was acquired in 1920.

This Anglican Church on Sixth Avenue was the only church north of Gibson's Landing for many years. The church served the needs of the entire Christian community from the earliest days when Mr Mashiter alternated his Anglican Sunday services with Presbyterian Minister Dr. Robert Young, to the first Lutheran services in town held there by Reverend C. Guebert in the late 1950's.

For a brief period in the early 1920's, the church boasted fine stain glass windows until the stone-throwing enthusiasm of local children forced their removal. Many of their children now own windows of their own in Squamish.

The church has now been tastefully converted into a Dance Studio.